On April the 27th, 84 Lumber announced the opening of its brand-new store in Boston. Despite offering building materials to commercial and residential builders for 61 years, 84 Lumber has never had a store in Boston, until now. The new establishment, which is conveniently located in Holbrook, is the first 84 Lumber store in Boston and the second in Massachusetts. The company operates another store in West Springfield. During the company’s grand opening event, which is scheduled for May 11 to May 13, the showroom will be fully equipped to showcase the company’s offerings to residential and commercial contractors.

The company highly encourages customers to collaborate with their associates to transform their dreams into reality, while relying on the company’s custom millwork and engineered wood products. The new store will also host an 84 Lumber Kitchen and Bath Design Studio. The studio can help consumers turn their ideas into 3D renderings in just 24 hours. The company sincerely hopes the new store will expand their footprint and help capitalize on the resurging housing industry. 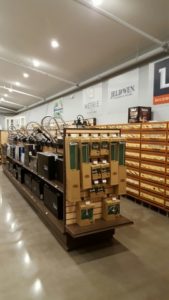 The store, which is located at 54 High Street in Holbrook, Massachusetts, will host a ribbon cutting ceremony on May the 11th at 5 PM. Hosts of HGTV’s Going Yard, Chris and Peyton Lambton, will be attendance during the store’s open house starting on May the 13th at 11 AM. This makes the second 84 Lumber store to opening during this year. Earlier this month, the company held a grand opening for their new Riverhead, New York store. To learn more about the new Massachusetts store and its grand opening, be sure to check out 84 Lumber’s press release here.