On March the 2nd, Amazon (NASDAQ: AMZN) announced a new clean energy initiative, which will involve installing solar panels on their fulfillment facilities throughout the world. During 2017, the company excepts to deploy large-scale solar systems on rooftops for at least 15 fulfillment and sortation centers in the United States. Simultaneously, the company is planning to deploy solar systems on fifty centers globally by the year 2020. The initial stages of the solar projects are expected to be completed by the end of 2017. The systems that are installed by the end of the year will generate up to 41 megawatts.

They will be placed on Amazon facilities in Nevada, Delaware, California, New Jersey, and Maryland. While it depends on the weather, season and other factors, it is estimated that the solar installation could potentially generate up to 80% of a single facility’s annual energy requirements. This is not the first time Amazon has delved into renewable, green energy to power their facilities. The company’s biggest wind farm is currently located in Texas. They also own a network of solar and wind farms in Virginia, North Carolina, Indiana, and Ohio. 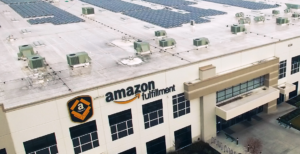 This network of green energy generators deliver energy to the electric grid, which is responsible for powering the company’s AWS data centers. Over the years, the company has announced or initiated construction on green energy products that will eventually generate a total of 3.6 million megawatts of renewable energy. In fact, the 2017 State of Green Business report confirmed that Amazon was the leading corporate buyer of renewable energy in the United States during 2016.

To learn more about Amazon’s new solar energy initiative, be sure to check out their newest press release now.