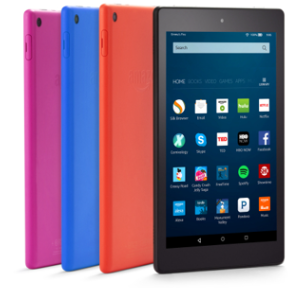 Amazon has worked diligently over the past few years to transform their Amazon Fire into an iPad killer. Although the iPad has remained supreme, the Fire HD is definitely a solid alternative. Today, Amazon (NASDAQ: AMZN) announced the brand new Fire HD 8. The next generation tablet is greatly enhanced over the previous version. Yet, the device will be available for less than 90 dollars. According to the company’s press release and the new specs, the device will be bolder, faster, and more impressive than the previous. First and foremost, the battery life has been extended to provide users with up to 12 hours of use. RAM has been increased by 50% to ensure users can browse the web and utilize their favorite apps with maximum speeds and minimum lag.

The Fire tablet will also feature Alexa. Users will now be able to access the content they device, by utilizing verbal commands. Additional features will be provided below.

Within the next upcoming months, Alexa will be made available on the Fire HD 10, Fire HD 8 Fire, and last year’s HD 8. The free software update will automatically be pushed to qualified devices. Now, Fire HD users will be able to experience exactly what has helped to make the Amazon Echo such a major hit. The Fire HD 8 is now available for pre-order. It is available in a 16GB version and a 32GB version, with prices starting at $89.99. With the microSD card slot, the devices are capable of supporting up to 200 GB of space.

Wal-Mart And Evenflo Launch First Of Its Kind Car Seat