Analyzing The Likely Repercussions Of Trump’s Assault On Syria

According to MSNBC’s Brian Williams, the photographs of the missile launch were beautiful. Senator John McCain suggested the infant president “responded well”. Lindsey Graham quickly jumped on the bandwagon calling for 7,000 American troops to enter Syria. Talking heads at FOX, MSNBC and CNN have shifted into overdrive praising the new Trump regime. At first glance, it would be easy to call Trump’s assault on Syria a victory and it is undoubtedly true that the new president desperately needed a win. To date, the Trump administration has been blocked in achieving any real progress aside from executive orders, which will be swiftly torn to shreds by a future opposition president.

While the media and fellow politicians may be gearing up for boots on the ground in Syria, plowing ahead would likely only worsen the situation. In fact, public perception of Trump’s move will likely differ immensely from the television pundits and fellow warmongers in Congress. 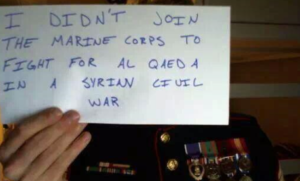 The appetite for war among Americans has dwindled since George Bush’s wars in the Middle East. After the devastating attacks on 9/11, Bush had substantial support among American citizens with approximately 76% of Americans backing the 2003 Iraq invasion. Obama got his feet bloodied in Libya. Only 47% supported airstrikes in Libya. And, how about Syria. It is easy to remember President Obama and John Kerry attempting to drum up support for an invasion of Syria back in 2013. The opposition to military action in Syria was astronomical. A Reuters poll around that time found only 9% of Americans favored entering the Syrian war.

The social media images featuring United States military personnel expressing antipathy towards an invasion still resonates strongly. Most expressed concern fighting alongside Al Qaeda and ISIS against Assad’s Syria. Obama eventually went to Congress for approval and was subsequently denied. It is hard to believe these brave individuals would change their minds now. In August of 2016, the Chicago Council on Global Affairs surveyed Americans about their eagerness to get involved in the Syrian civil war.

72% of Americans supports airstrikes against violent extremist groups, while 57% supports sending Special Operations to combat these groups directly. 52% favored a no-fly zone and bombing of the Syrian regime’s air defenses. Note the survey did not ask Americans about their opinions regarding a direct conflict with Syria. While Americans may support delivering a blow to ISIS and other Islamic extremists groups, infiltrating Syria is largely opposed.

In 2013, the real culprit behind the gas attacks in Syria was heavily debated. While the Western media and many politicians were quick to blame the Assad regime, many questioned their government. At the time, Americans were told Bashar al-Assad was directly responsible for the gas attack. Nevertheless, no evidence was never delivered to prove one way or another. This week, the American media has been building anticipation and support for an attack on Syria. It has been nearly impossible to turn on a major news network without hearing about the Syrian dictator. While we’ve all seen the hideous pictures, the evidence has still not been deliver.

Again, a lot of Americans do not believe the narrative that they’re being fed. And why would they? After all, the media is fake! After the debacle of the last election, the scandals, and Trump’s rhetoric, few Americans believe the media or American military agencies. If Donald Trump wanted to build up morale and support for a war in the Middle East, he should’ve realized he would’ve needed the media’s support to do it. Instead, he talked his way into a box and was forced to act with or without support.

It doesn’t take more a few minutes to find Trump supporters, Hillary supporters and everyone in between that question whether or not Assad’s forced used gas on their citizens. Without delving into the conspiracy of it all, Americans no long trust their politicians or media. Without evidence and possibly even with it, Americans would still question the story. And, some politicians, such as Senator Rand Paul, would like to see the evidence as well. If Russia or another produces alternative evidence first, Trump’s decision to act hastily could prove to be one of the biggest blunders of our time.

Again, American media has praised the attack on Syria. The missile launch pictures were beautiful, on point, and effective. At least that is what you’re supposed to believe. According to Fox News, initial reports suggest the Syrian airbase was ‘almost completely destroyed’. Other sources suggest otherwise. While the United States claims all of their missiles aside from one hit their targets, Russians claim only 23 did. While it has been reported that 6 Syrian jets were destroyed, the airbase remains intact. The reports are diverse, but one thing is clear. Many of the buildings remains standing and the airbase itself is still operational.

At around 3:24pm, Reuters reported Syrian jets were once again taking off from the Shayrat Air Base. Despite the high cost of the airstrikes, the efficiency was surprisingly low.

What is likely to happen now? Directly after the airstrike, rebel opposition forces in Syria launched an attack against the Assad regime. Syrian jets are reportedly still flying high. The civil war is far from over. John McCain and Lindsay Graham and others want more. Whether or not Assad used the gas, it is certain that more will be used in the future and it is terrifyingly obvious Assad will quickly receive the blame with or without a shred or evidence or a second of investigations. Eventually, Donald Trump will be forced to make another decision. Will America and allies delve deeper into the Syria conflict at the risk of alienating Trump’s base?

Simultaneously, the strike against Syria closely aligns the Trump regime with ISIS and other Islamists extremists. Will ISIS feel empowered by Trump’s actions? While Assad may not be perfect, it is hard to sympathize with ISIS militants and their disgusting attacks, which include hiding bombs in Teddy bears. Nevertheless, Trump has intentionally or unintentionally sided with such factions. These groups may very well feel emboldened to step up their attacks in Europe and the United States, due to the actions of the United States. It didn’t take long. Sweden was the setting for a potential terror attack today and London not too long ago.

With another ‘gas attack’ all but imminent, Donald Trump will be forced to make another move and he has clearly shown he is willing to side with the extremists.

George Bush’s legacy was stained by the invasion of Iraq, despite having enormous support at the time. Obama was constantly plagued by the red line and the overthrowing of Muammar Gaddafi. Donald Trump most certainly separated and differentiated himself from both former presidents. Unfortunately, it has already led to a great deal of defection from Trump loyalists. This will not stop the media and other politicians from pushing for more US intervention in the Middle East, but it could prove to be far worse than the aforementioned tragedies. The Russia-US deconfliction mechanism has reportedly been suspended and Russia claims they’ll work to strengthen Syria’s defenses.

With the two forces working on opposite sides in Syria, it is only a matter of time before something go awry. Trump and America will likely get their war one way or another, but the costs could finally be the straw that finally severed Trump from his staunch base. Again, another gas attack is imminent. Someone wants a war and they’ll get it. The best-case scenario, despite being horrible, is Assad’s removal after being accused of another gas attack. In the worse-case scenario, Russia and America will get intertwined in something far more frightening.

Nevertheless, most Americans will place the blame squarely on the Trump administration. That will lead to poor morale among United States citizens and a total lack of support for intervention in the Middle East. Sadly, it doesn’t look like Syria’s civil war will be over anytime soon and Trump has now secured America’s place in the matter. Trump proved he was ‘tougher’ than Obama, but history might not look so kindly upon the new president.