Have you ever wondered why your Android phone’s battery seems to deplete faster? Have you noticed that your phone’s storage space and shrunk substantially smaller? There is a possibility that you’re running a top performance draining app on your phone. Just recently, Avast performed a thorough examination of mobile apps and their effects on Android phones. The calculated their results based on the app’s impact on the phone’s battery life, data plan use and storage capacity. While some of the same apps remained, a few newcomers joined the list. News applications, ynet and Daily Mail Online, joined the regulars, such as WhatsCall, Instagram and Facebook. 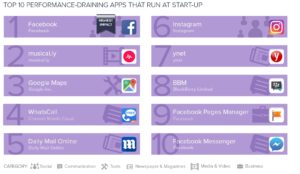 While some apps took an even greater toll on consumer’s phones, a few managed to improve their performances from the previous study. BBC iPlayer, WhatsApp, WeChat, Kik, SoundCloud, and Mozilla Browser all improved enough to escape the top 10. In terms of news apps, the United Kingdom led the way. The Guardian and Daily Mail were near the top of the list for consuming excessive storage space and bandwidth. The dating application, Tinder, was far worse. The app drained the user’s phone and consumed more data than many of its competitors.

Nonetheless, Facebook reigned supreme with musical.ly coming in a close second. Google Maps and WhatsCall ranked third and fourth respectively. According to the study from Avast, users that spend a few minutes watching 25 clips consecutively through the Musical.ly app drained approximately 100MB of data. Over a month, this could top nearly 3GB. The music app was even worse in terms of storage capacity. It claimed the number one spot as the biggest storage drainer. While the TayuTau Pedometer might be designed for those interested in maintaining good health, it will ultimately weaken the phone’s battery life.

Avast suggests using the application for a 50 minute run would drain the battery by more than 30%. A five minute walk in which the screen was mostly shut off even resulted in a 3% battery loss. Lastly, consumers should be cautious of the Jehovah’s Witness app, which was deemed to be the worst for consuming excessive storage space. In fact, tests performed by Avast suggests the app consumes as much as 3GB for simply watching the introduction videos and 2GB for downloading the scripture.

For additional information about resource hogging Android apps, be sure to check out the official press release from Avast here.