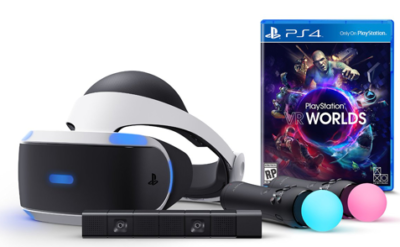 Virtual reality technology has been praised as the next big thing, but has thus far been unable to live up to the hype. However, that could all change with Sony’s (NYSE: SNE) introduction to the market. Unlike some of the other VR headsets, the PlayStation VR is backed up by one of the top gaming companies and it is gear precisely to gamers. Suffice to say, it has already generated substantial hype and Sony anticipates supply shortages shortly after the headset’s release. GameStop (NYSE: GME) and Best Buy (NYSE: BBY) hope to benefit from the excitement by hosting midnight launches for the innovative PlayStation VR.

The system is expected to launch on October the 13th and will be available at select GameStop and Best Buy stores throughout the country. Best Buy will open approximately 350 stores for the headset’s launch, while GameStop intends to allow gamers to pickup their headset at more than 1,600 retail establishments. All of the aforementioned establishments will open at 12:01 Eastern time, so gamers can get their hands on the headset as quickly as possible. At the time of the launch, 8 physical games will be available. This includes the following titles.

Gamers have been able to experience the system for themselves through demonstrative stations in some stores since June of this year. Many locations, including Best Buy and GameStop stores, have allowed games to play Headmaster, Battlezone, Superhypercube, and even PlayStation VR Worlds. Although the PlayStation VR will ultimately be a step in the right direction for virtual reality technology, it is essential to remember that there are some requirements.

In order to utilize the headset, consumers will need a PlayStation 4 and a PlayStation Camera. Neither are included and the VR headset itself costs a hefty $400. To help accommodate current PlayStation 4 owners, who do not own a camera, Sony also has developed a bundle for $500. The bundle includes the camera, PlayStation VR Worlds and two Move Controllers. Whether or not the PlayStation VR will live up to the hype remains to be seen. Nonetheless, many will be eager to get their hands on the VR headset and it could prove to be very beneficial for GameStop, Best Buy and other video game retailers.

A successful launch could also push Sony to new heights. To find a GameStop store near you with a midnight launch, be sure to click here. Consumers, who wish to find their nearest Best Buy, should proceed to the following link.