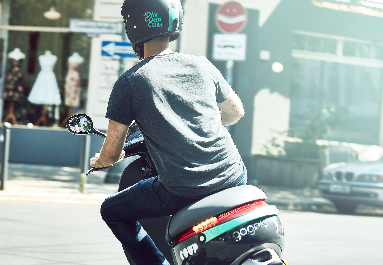 Gogoro Inc., which is backed by Panasonic, is teaming up with Bosch to launch a scooter sharing service within Europe. The startup, which is primarily known for manufacturing electric scooters, hopes the move will give them the ability to expand beyond its home country of Taiwan. Those living within Berlin will be able to utilize the service of the two companies starting today. Bosch’s subsidiary Coup is responsible for cooperating with Gogoro and has given commuters the ability to locate, book and pay for an electric scooter through their smartphone.

New York and several other locations have already benefits from bike sharing programs. With Gogoro, consumers, who rent a scooter, will be able to leave it at their destination. There is no need to transport it back to a central docking station. The CEO of Gogoro, Horace Luke, has expressed interest in speaking to other European cities in the future. Gogoro was founded in 2011 and first introduced their scooters at last year’s Consumer Electronic Show. The company will provide Coup with 200 scooters to get the ball rolling in Berlin, with the intention of adding additional scooters as needed.

Scooter rents will be able to pay as little as 3 euros or $3.37 for 30 minutes of use of 20 euros for the entire day. Gogoro has been selling scooters in Taipei since last August and has reportedly sold over 10,000 scooters in Taiwan. The company has also established 225 charging stations. The cooperative deal with Coup will give them the ability to expand their grasp. The company also recently announced their intention to make their smart scooters available in Amsterdam. This has yet to happen.

The Gogoro Smartscooters are capable of traveling at maximum speeds of 45 KPH and can be driven by anyone over the age of 21, as long as they hold a valid car or motorcycle driving license. Those, who wish to experience the service for themselves, will need to download the associated Coup app. For additional information, be sure to check out Gogoro’s official website.