Call Of Duty Infinite Warfare Gaming For A Good Cause

Activision Blizzard (NASDAQ: ATVI) has worked to put vets back to work since 2009. During that year, the Call of Duty Endowment fund was established. Since then, the fund has managed to return over 20,000 United States veterans to work, with 94% of those obtaining full-time jobs. While it is possible to donate directly through the fund’s official website, Activision Blizzard has engineered an ingenious way to get gamers in on the fun. On December the 6th, the company announced new in-game items for the Call of Duty: Infinite Warfare video game.

The Endowment C.O.D.E. Courage Personalization Pack was made available on the PlayStation 4 on December the 6th. The content is expected to be available for the Xbox One very soon. The package includes a handful of exclusive content including the following. 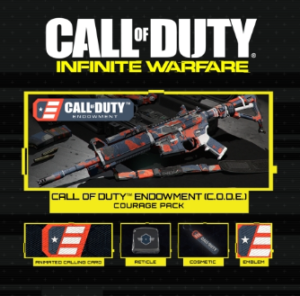 The company will also celebrate the launch of the Courage Personalization Pack with a stream of Infinity Ward’s studio. The stream will be available through the Twitch Infinity Ward channel and will begin at 11AM PST on December the 9th. Developers, special guests, and members of the game’s casts are expected to make appearances during the stream. To date, the company has managed to bring in over 1.7 million dollars, thanks to their DLC offerings. As mentioned above, that money has helped over 3,100 veterans find quality employment.

The Call Of Duty Endowment is a non-profit corporation. The organization claims each placement costs less than 600 dollars. The 6-month retention rate is 89%. The money generated from the new in-game content will help the organization meet their goal of helping at least 50,000 vets obtain high-quality jobs by 2019. The in-game content is now available on the Sony PlayStation, while Xbox One users should be able to get their hands on it in the upcoming days.