On May the 8th, Comcast launched the new Xfinity xFi digital dashboard. The innovative platform gives consumers the ability to take complete control of their Wi-Fi network through various devices, including a smartphone, television or computer. The simple interface can be used for the initial setup, finding the password, troubleshooting problems, setting up parental controls, and even halting Wi-Fi access at specific times of the day or night. The service is now available to 10 million Xfinity Internet customer totally free of charge.

Users can get started right away by visiting www.xfinity.com/myxfi or by downloading the xFi app on their iOS or Android smartphone. In order to be eligible, consumers need to have a compatible Xfinity device, such as the xFi Advanced Gateway or the xFi Wireless Gateway. It is expected that 86 percent of broadband use inside the home will travel over Wi-Fi this year. Simultaneously, Americans are expected to have an average of 50 Wi-Fi connected devices in their homes by the year 2020. 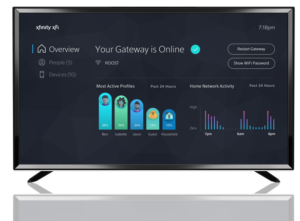 With Wi-Fi use on the rise and more connected devices entering the home, Xfinity believes their xFi platform will help simplify the home network experience. Some of the other benefits provided to consumers can be found below.

The xFi system can also be managed with voice control in conjunction with the X1 voice remote. Comcast will continue rolling out the feature this year, with the total number of homes increasing to about 15 million by the end of 2017. As a part of the rollout, the company will rename its more popular wireless gateway device. The xFi-enabled device, which is used in approximately 10 million homes, will known be called the xFi Wireless Gateway.