DHL Express is the world’s leading international express service provider and business has been growing steadily. On February the 23th, the company announced that it will soon recruit nearly 900 new employees to join its Americas Hub, which is located at the Cincinnati/Northern Kentucky airport. The new recruitment drive comes after the company finalizes the $108 million expansion of the Americas Hub. The company will need to increase their workforce as the expansion to a new day sort operation is completed.

A projected growth in shipments will also help to push the hub’s workforce from 2,400 employees to nearly 3,300. In order to recruit as many eligible workers as quickly as possible, DHL will hold a job fair on March the 4th. The event will take place at the CVG Centre in Erlanger, Kentucky. The company intends to get the new hires to work as rapidly as possible. New hires should be prepared to work as soon as the pre-employment processing has concluded. Most will be on the floor and working no later than May the 1st, when the new Daytime operation will begin. 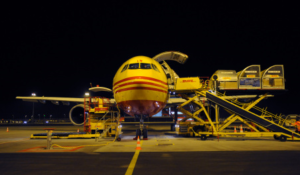 Since 2009, DHL has invested more than 280 million dollars in its Americas Hub. The most recent expansion added a new north ramp, which is strategically placed on 45 acres of land. The expansion will also provide new parking spaces for 16 additional planes. Now, the hub will be home to 65 aircraft gates in total. The expansion also enhances the hub’s automated sorting capability and adds 40 new reload positions. This combination will ensure that the hub is ready to handle the growing shipment volume expected in the United States and throughout the Americas.

In May, DHL will also add a new day shift 7 days a week to accommodate the shipment volume growth. The job openings at the DHL hub is a mixture of full and part-time positions. Health benefits and tuition reimbursement will be offered. Also, the new positions will allow for a range of flexible work schedules. Those interested in becoming a team member should attend the upcoming DHL Express Job Fair. The event will be held at the CVG Centre located on 77 Comair Boulevard in Erlanger Kentucky. The fair will run from 9 AM to 5 PM on Saturday March the 4th.

Applicants should be sure to bring along two forms of government-issued ID. They should also be ready to pass a background check and drug screening. Those interested in learning more are encouraged to visit the company’s latest press release.