The holiday season is in full swing and consumers will have plenty of electronics gadgets to choose from. The Santa Monica-based innovation incubator, Doyodo LLC, wants consumers to step back into the past and relive the glory days of retro gaming. The company’s RetroEngine Sigma Gaming Console launched today on the Indiegogo crowdfunding platform. While the device is billed as a retro gaming console, it offers immense versatility and can be utilized for an array of other purposes. Despite the pocket-size design, the device works as a 4K media center, home computer, and a gaming console.

Doyodo promises that the device will be suitable for everyone, thanks to the plug-and-play setup. The setup requires no experience or tech savviness. The console will work right out of the box, since it comes with several pre-installed titles. Consumers will also be able to set up their RetroEngine Sigma console by following the simple smartphone-guided procedure. With a little tweaking, the console can be made compatible with an array of retro consoles, including the Super Nintendo, Sega Genesis, Atari VCS 2600, and more. 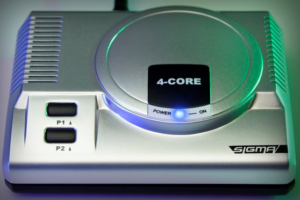 While the device is very compact, it is also enormously expandable. The console doubles as a fully-configured desktop computer. With the simple 1-click installer, users will be able to configure the console’s network access and customize their system to their heart’s content. There is very little the RetroEngine Sigma cannot do.

A Deluxe version of the console is also available. The Deluxe version includes an extra controller, Bluetooth compatibility and 32GB of storage space. The RetroEngine Sigma is now available on the Indiegogo platform. Supporters of the project can acquire their very own console for just $49. At this point in time, the RetroEngine Sigma Mini Console & Media Player has already attracted well over 650 backers for a total of $50,000. Suffice to say, they have already met their $20,000 goal. For additional information and to become a backer, be sure to check out the company’s official Indiegogo page here.