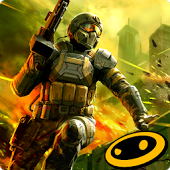 Glu Mobile (NASDAQ: GLUU), which is best known for Kim Kardashian: Hollywood, has teamed up with China’s Tencent to bring the immensely popular WeFire to Western markets. The new game, Rival Fire, is now available on the Google Play store, as well as Apple’s iTunes. The game features cooperative gameplay, as well as player-versus-player combat. As the company’s press release claims, Rival Fire delivers the most engaging multiplayer experience on the mobile platform.

Rival Fire will be made available in North and South America, as well as Australia, New Zealand, and EMEA. Aside from cooperative and PVP gameplay, the game also features guild versus guild leaderboards, private and global chat, and weekly prizes for top performers. With four game models and an assortment of devastating weapons, gamers will remain engaged and will feel compelled to experience everything the game has to offer.

The game revolves around a criminal organization, which is identified as Project Cobra. This nefarious group has been working behind the scenes to bring war and conflict to the world. Gamers will join an elite fighting force, FALCON, to put an end to the group’s evil plans.

Earlier this month, Glu released Gordon Ramsay Dash. Thus far, both games have achieved mostly positive ratings, which is definitely an improvement for Glu. Although the initial launch of the game did manage to move GLUU stock higher, investors pulled the stock back down on Thursday. During the day’s trading period, GLUU stock fell 2.27% to settle at $2.58. The stock maintains a 52-week range of $1.98 to $6.25.

The Chinese counterpart of Rival Fire, WeFire, was launched in China on January the 8th of 2015. Much like many of Glu’s games, WeFire is completely free to play, but there are multiple in-app purchases. Since last year, Glu has worked to redesign the game to better accommodate American audiences. For Glu, the game may very well be another profits booster. For Tencent, the game is just another step into the American market.