Before President Donald Trump officially took office, he held a meeting with Chinese businessman and Alibaba executive chairman, Jack Ma. The two discussed jobs and Ma made a promise to use his online sales platform to help 1 million American small businesses enter to Chinese market. At the time, many were skeptical. Nevertheless, Ma has set out to prove them wrong. On Tuesday, the Chinese businessman announced a new program that would allow him to fulfill his promise to the President. Alibaba will host a conference in Detroit on June the 20th and the 21st. The sole purpose of the conference is to prepare United States businesses to enter the Chinese market by selling to Alibaba’s 443 million customers.

The American and Chinese markets are the two largest for small businesses. Alibaba President, Michael Evans, told USA today, “connecting them seems like a good idea”. Evans also believes the connection would prove to be equally beneficial for both countries. Americans are familiar with seeing Chinese-made goods stack their supermarket aisle shelves. The opposite is a rarity. Alibaba is currently home to 7,000 businesses from the United States, but that consists mainly of large corporations and big-name brands. Alibaba has set their sights on increasing that number to one million over the course of five years. Ma expressed his intention of creating 1 million United States jobs during his meeting with president-elect Donald Trump. 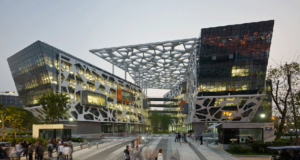 The company and Ma will take the first step in June, when they host 2,000 small business owners, farmers and entrepreneurs to their Detroit conference. The conference will layout a 3-step approach that Ma and his colleagues will help US companies succeed in China. First, participants will learn about the opportunities awaiting in China. Next, business owners will learn about the inner workings of the Chinese market. They’ll learn about all aspects of doing business in China, including finding a partner, logistics, shipping, and even the foreign exchange.

And finally, as Alibaba does best, the company’s representatives will play matchmaker and introduce American business owners to their Chinese equivalents. While Alibaba is frequently compared to Amazon, the two are vastly different. Alibaba does not sell goods directly to the consumer. Instead, the platform acts as a meeting place for buyers and sellers. The company believes American companies could have success with Chinese consumers, especially for food and beauty products. Chinese consumers distrust Chinese-grown foods and Chinese beauty products. On the flipside, American products and foods tend to have more credence with the Chinese consumer.

While the strict regulations may make it difficult for American companies to break into the Chinese market, Ma believes he can help. Ma composed an editorial in 2015 discussing the opportunity for Americans to sell online in China. Suffice to say, his master plan has been in the works long before his much-hyped meeting with the President Elect. Should Alibaba be able to establish itself as a gateway for American merchants and the Chinese consumer, everyone involved would benefit and that certainly includes the company itself. Alibaba is owned by Alibaba Group Holding Limited. The company’s stock trades on the New York Stock Exchange under the ticker BABA.