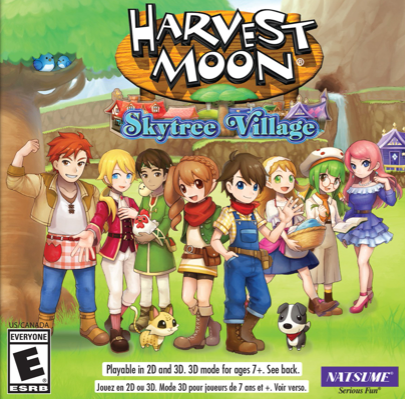 Video game publisher Natsume is happy to announce the upcoming launch of the new addition to their Harvest Moon franchise. The brand new game, Harvest Moon: Skytree Village, will be made available in North America on November the 8th. The game will launch in the European market through Rising Star Games in Spring of 2017. Natsume has also introduced gamers to the game’s eligible bachelorettes. Much like the previous games in the series, gamers will be able to take on the role of a boy or girl and eventually settle into marriage with a suitable candidate.

Gamers will be required to harvest the land, while attempting to save Skytree Village. The new game will feature many new characters, a new art style, and even a new animal. Players will have greater control of their land with a new terraforming feature. Now, it will be entirely possible to raise or lower the land. Creating rivers and ponds is also a possibility. Many of the features, which helped to make the previous games so successful, remain. This includes upgradable tools, marriage, and a wealth of farming fun.

Natsume is a Japanese video game developer, which was founded in October of 1987. Throughout the company’s venture, they’ve been responsible for launching many innovative titles, including the River King series, Reel Fishing, and the Rune Factory series. Of course, it has been the Harvest Moon franchise that has gained them the most fame and success. Fans of the series won’t need to wait too much longer. November the 8th will be here before they know it! The game will be made available in stores, through online retailers, and can also be downloaded through Nintendo’s eShop.