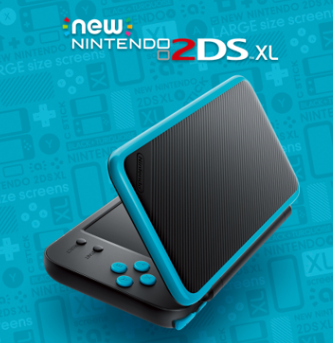 Nintendo has experienced great success with the launch of the Switch and the ongoing popularity of the company’s handheld systems. On April the 27th, the company announced a revamping of their ultra popular Nintendo 3DS handheld. The newly redesigned Nintendo 2DS XL will make its debut in the United States on July 28 and will retail at a suggested price of $149.99. This will give consumers even more options, with the new 2DS XL being moderately more affordable than its 3DS XL counterpart. The handheld system’s launch will coincide with the launch of two upcoming 3DS titles, Miitopia and Hey! PIKMIN. Simultaneously, the game console will support the 3DS’s most popular titles, including Fire Emblem, Mario Kart, Animal Crossing, and The Legend of Zelda.

The new system will feature a very stylish black and turquoise color scheme, while the screen will equal the size of the New Nintendo 3DS XL system. While the system will only be able to display 2D imagery, it still packs the same amount of power as its rivals. Also, the system is lighter and is equipped with built-in NFC support for utilization with amiibo cards and figures. Gamers will have no difficulty finding games for their new Nintendo 2DS XL, since the handheld is compatible with 3DS and DS games. This ultimately gives them thousands of titles to choose from.

For parents, the New Nintendo 2DS XL is equipped with comprehensive parental controls, which allow adults to carefully control the content their children can access. Those interested in learning more can do so by visiting http://www.nintendo.com/2ds/new-nintendo-2ds.