On April the 13th, Nintendo provided investors with news regarding the success of their Nintendo Switch console. The console, which also acts like a portable system, has sold quicker during its launch month that any system in the company’s history. According to the NPD Group, the Switch has sold more than 906,000 units. Thanks to these figures, the Switch is one of the fastest-selling video game consoles of all time. More importantly, the console was launched during a nontraditional time. The company’s last console, The Wii U, was never really able to excite consumers. The NPD Group suggests the company sold 425,000 Wii U units during its launch month.

Poor sales for the Wii U were mainly attributed to weak launch times and limited 3rd party support. Nintendo officially ended production of the Wii U in January of 2017. Thankfully for Nintendo, the Switch has been a success with more than 1.5 million units selling during its first two weeks. More importantly, during the company’s 2016 fiscal year earnings report, Nintendo affirmed the Switch would be profitable from launch. Subsequently, the Switch’s brightest title, The Legend of Zelda: Breath of the Wild, has sold over 1.3 million units. 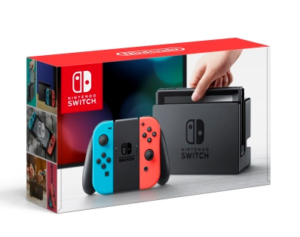 The title is now Nintendo’s fastest-selling launch game of all time and the fastest selling game from the series. Nintendo admits shipments have been unable to keep up with high consumer demand for their new Switch console. They would like to reaffirm that they’re working diligently to ensure everyone that intends to buy a Switch will be able to do so. Nintendo expects another boost in sales in just over two weeks when Mario Kart 8 Deluxe is launched for the console. The game, which officially launches on April the 28th, will have more content than any previous title from the series.

This includes 48 racing tracks, brand-new Battle modes, new characters, and so much more. And finally, ARMS will launch in mid-June and Splatoon 2 in mid-July. Nintendo will provide full accounting of Nintendo Switch sales along with other financial information when they release their fiscal-year earnings on April the 27th. This information can be found at the company’s investor relations page at https://www.nintendo.co.jp/ir/en.