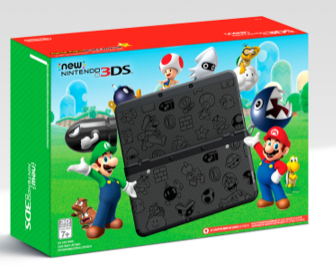 Black Friday is right around the corner and consumers throughout the United States are eagerly awaiting some of the best deals of the year. Video game enthusiasts will be eager to see what their favorite brands are offering. Nintendo’s 3DS handheld system was originally released in early 2011. The 3DS XL came approximately a year later. And finally, the New Nintendo 3DS entered the European and American markets in February of 2015. Nintendo reported shipping more than 61 million 3DS units as of September 30, 2016. While many gamers have already experienced the revolutionary system, Nintendo believes their Black Friday discount will give even more consumers the opportunity to do so.

The New Nintendo 3DS system will be available in two unique special-edition models. The black and white versions both feature imagery associated with the company’s popular Mario and Luigi series. And the best aspect of all is that consumers can snatch up one of the special edition models for just $99.99. The price drop is the first time the New 3DS has been sold for less than $100 and therefore will prove to be an excellent gift for children of all ages. Parents won’t have to look far to find suitable, age-appropriate titles for their children.

The Nintendo 3DS games library is enormous. Games can be downloaded directly from Nintendo’s eShop or parents can pick up some of the hottest titles directly from retail stores. Pokémon, Zelda, Mario, and Animal Crossing titles have helped to make the handheld console an enormous success. These titles are suitable for all age ranges and will most certainly put a smile on children’s faces on Christmas day. The $99.99 version of the New Nintendo 3DS will be available beginning on November the 25th.

Parents will love the 3DS’s comprehensive parental controls, which will allow them to prevent their children from accessing inappropriate content. For additional information and to learn about available titles, be sure to check out Nintendo.com/3ds.