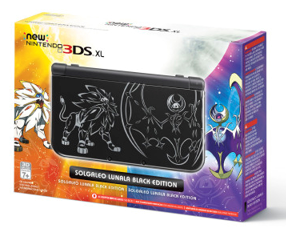 Pokémon has managed to maintain its popularity over the years. The franchise was originally created in 1995 and it has only increased in popularity. The recent release of the mobile spin-off, Pokémon Go, proved that the franchise is more popular than ever before. Nintendo (OTC: NTDOY) understands this and strategically conjures up ways to enhance their profits from Pokémon releases. With the upcoming releases of Pokémon Sun and Pokémon Moon, the company has decided to sweeten the pie with the addition of a brand new Nintendo 3DS XL system!

The brand new handheld console features a unique design, which is inspired by the Pokémon titles. Legendary Pokémon from the two games adorn the system’s cover. The two Pokémon games are expected to hit the market on November the 18th, while the new Nintendo 3DS XL system will be available to the public a few weeks earlier on October the 28th. At this point in time, the system is expected to retail at $199.99. The span between the release of the console and the Pokémon games will provide gamers with plenty of time to break-in the buttons.

On November the 18th, fans will be able to purchase both Pokémon games individual or they can opt for the Dual Pack. The Dual Pack will contain both games, as well as two digital codes that will unlock 100 Poke balls for each game. The Dual Pack is expected to retail at $79.99. Fans of the series will definitely want to experience the upcoming additions, which are believed to be the best to date! And, there is no better way to enjoy the experience than with the brand new customized Nintendo 3DS console. For additional information, be sure to check out Nintendo’s official press release here.

Pandora Aims To Monetize With Pandora Plus