Nuns In Pennsylvania Protest New Gas Pipeline Near Their Land 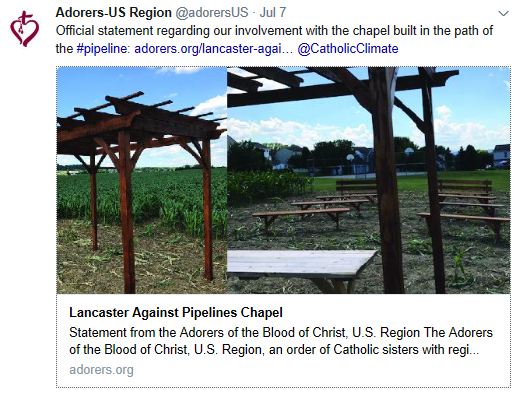 In Pennsylvania, Williams Partners has gained regulatory approval from the Federal Energy Regulatory Commission, FERC, to construct, maintain and operate a pipeline on Pennsylvanian land. The natural gas pipeline will be a part of the company’s Transco, Transcontinental Gas Pipe Line. The pipeline transports gas from the Gulf coast of Texas, Mississippi, Louisiana, and Alabama to New Jersey and New York City. Along the way, it passes through several states, including Georgia, Virginia, Maryland, Pennsylvania, and the Carolinas.

To gain approval from the EPA and Department of Justice, the Transcontinental Gas Pipe Line Corporation has agreed to test soil and groundwater contamination close to their compressor stations. The agreement also includes a cleanup program for polychlorinated biphenyl. Nevertheless, many activist groups have protested the construction of pipelines in the United States. In Lancaster County, Pennsylvania, a group of nuns associated with the Adorers of the Blood of Christ hope to stop the company from building a section of the pipeline on their land in Hempfield Township.

The Adorers have refused to cooperate. In 2005, their congregation signed a Land Ethic to honor the sacredness of creation, treasure land as a gift, and reverence Earth as a sanctuary where all life is protected. To combat Transco, the Adorers and the grassroots coalition, Lancaster Against Pipelines, have decided to install a portable prayer chapel on the land. They hope the chapel will help to unite people against the unjust and unholy uses of land. According to an official statement on the group’s website, the Adorers understand that the federal court order of eminent domain will give Transco the ability to remove the chapel. They hope it gives tangible witness to the sacredness of Earth, as long as it stands.

As for the Lancaster Against Pipelines group, it seems they’ll remain adamantly opposed to the pipeline. The group believes that the nuns’ right to the land should be respected. One of the group’s members, Mark Clatterbuck, recently stated, “It’s not about money, its about principle. And the nuns have a land ethic that says this Earth is a sanctuary and we regard it as sacred and we’re going to work to protect it.”

The nuns were expected to set up the open-air chapel to protest the pipeline’s construction on Sunday. The chapel will be placed directly in the proposed path of the pipeline. A protestor on site claimed that around twenty members of the Adorers were living on the site. The dispute will enter the courtroom on July the 17th. The Adorers hope their protest will inspire others to come out in support of their cause.