For the past few weeks, prison stocks, GEO Group (NYSE: GEO) and Corrections Corp of America (NYSE: CXW), have experienced extreme volatility. The atomic bomb was dropped on both companies and their investors, when the Department of Justice ridiculed private prisons and announced they would begin phasing out use of such facilities within the coming years. Next, Homeland Security has decided to review their use of private prison companies to house illegal immigrants. No matter how many inmate sentences Obama can commute during his last few months, the United States justice system simply cannot survive without private prisons, or at least their facilities.

The 13 privates prisons currently being used by the Bureau of Prisons holds approximately 20,000 inmates. Obama has worked hard to commute prison sentences for federal inmates, but he has a long way to go, before he can defeat the problem of overcrowding. The United States has a prison population, which is substantially higher than Russia, South Africa, Canada, Australia, and Japan. The overcrowding problem isn’t going anywhere. Limestone Correctional Facility in Alabama was opened in 1984. The prison is home to 2,236 prisons with a total of 2,532 beds. The facility has a maximum capacity of just 2,086.

The prison, which is managed by the Alabama Department of Corrections, has no air conditioning and double-bunked beds are often stacked less than ten-inches from one another. Patrol officers have difficulty seeing everything happening within the dorm at any given point in time. Alabama governor, Robert Bentley, wishes to consolidate the 14 prisons into Mega Prisons, which will house 4,000 inmates each.

In Illinois, the prison population has fallen steadily over the past few years. As of July the 1st, the prison population was right around 44,700 inmates. In June of 2014, the number fell at just below 49,000. Still, the state’s prisons are considered overcrowded by nearly 12,000 inmates. And, the State of Oklahoma is far worse. It ranks number two for the most inmates with 700 of every 100,000 people in incarceration. The current average for the country is 471.

Also in Illinois, local Union members took to the streets to protest the current situation at Pontiac Correctional Center. The Union members expressed concern for their own safety and cited overpopulation as the source of the majority of problems. 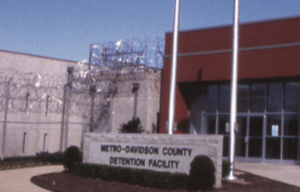 The Need For Room And Jobs

The current overcrowding problem is unlikely to change anytime soon. Not only will the elimination of private prisons complicate the problem further, but it’ll also increase the unemployment rate throughout the country. Removing a single private prison from the picture will eliminate room for 2,000 to 3,000 or more inmates. Where will they go? Will they be free to roam the streets and reoffend? The jobs problem is far more concerning. The Big Spring Correction Center in Howard County employs around 550 people. Howard County’s Judge, Kathryn Wiseman, admits the eradication of private prisons will “have a great impact as far as Howard County is concerned.”

GEO will pay the city of Big Spring around 1.1 million in lease payments during the 2016-2017 fiscal year. According to GEO Group’s website, they current employ over 20,500 professionals. CCA employs a little under 16,800 as of December 2011. CCA operates 22 federal facilities and has a capacity of 25,851 prisoners. GEO Group operates 26 federal prisons with a capacity of 35,692 inmates. What will happen to these 61,000 inmates, when the contracts are ended? Will the 37,300 workers receive help finding work elsewhere?

After a brief look of reviews from former and current employees with Corrections Corporation of America, most were satisfied with the pay and benefits. Many criticized the management. Should these hardworking individuals be thrown to the wolves just to see to it that a inmate, who has likely thrown their own life away, gets treated with kid gloves?

In a perfect world, Obama’s plan of eliminating private prisons would be well received. In a perfect world, prisons wouldn’t be a requirement. There would be no crimes at all. This isn’t a perfect world and the mass majority of inmates don’t even come close. Many have committed horrible crimes, including vicious burglaries, sex offenses, and senseless murders. Some 30,000 inmates are locked up for weapons, explosives or arson related crimes. 84,000 are behind bars for drug crimes, according to BOP statistics. Those labels are misleading and do not tell the entire story.

How many of those drug pushers sold drugs to fund other crimes and how many were complicit in overdoses? How many weapons related arrested prevented robberies and murders? In 2005, recidivism rates in America topped out at 60%. Letting a small level drug pusher go free is great, but it may very well allow them to run free and offend once more. And, the second time around, their crimes may very well be worse. According to a 2005 report, 82% of property offenders were arrested for a new crime within just 5 years of their release. 77% of drug offenders were arrested within the same time period after being released.

Obama’s commuted criminals will likely remain criminals and will likely end up in prison sometime in the future. No good deed goes unpunished. 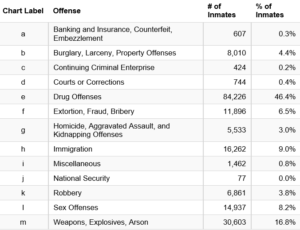 Depending on your political stance, you may have a bad opinion of Correction Corp of America and the GEO Group. This is understandable. Prisons are horrible places, but they’re also a necessity in America, which has an unhealthy obsession with violence and crime. If these two companies are forced out, the federal government will be forced to step in and begin building new prisons. The Nevada state Public Works Board knows this first hand. The board heard about the need from increased capacity from their consultants Arrington Watkins Architects, which intends to increase the capacity by almost 1,000 beds. The cost? Around $300 million.

Prison officials in Nevada admit the inmate population has already soared 700 inmates higher than originally expected. All institutions are near full capacity. Private institutions are not the problem. They’re the solution. Even the ultra-liberal Bloomberg knows all prisons are awful places. Those that don’t want to experience the hideous nature of prisons should remain out of trouble.

Those that want to benefit from Obama’s ploy will want to consider longing GEO or CXW. Both companies are needed and their departures would negatively impact the country. They’ll survive and the talking points will long be forgotten.