Obsidian Energy Forced To Shut Down Oilfield After Thieves Make Off With $200,000 In Copper

Obsidian Energy was forced to shut down an oilfield northwest of Drayton Valley earlier in July. The decision was reached after thieves broken into the area and made off with approximately $200,000 in copper wire. The two thieves, who happened to be driving a two-tone dark Dodge Dakota or Chevrolet pickup truck, have yet to be captured. At this time, their identities remain unknown. However, their actions had devastating impact on Obsidian, which was formerly known as Penn West Exploration.

Obsidian has been forced to shut the site down. The RCMP also confirmed that the damages exceed $1 million. The two thieves were captured on camera breaking into the site at 3:30 AM on July the 17th. Sgt. Erin Matthews with the RCMP admits oilfields have come big targets for thieves and a major burden for today’s struggling oil companies. 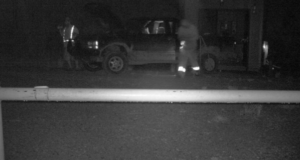 “Thefts in the oilfield is a serious problem which creates a financial burden to companies who are already struggling in these financial times.” He also went on to admit that the problem is only getting worse. “This is an ongoing issue everywhere and it’s getting worse.”