PBS has nearly 350 member stations throughout the United States. The network strives to open new doors for Americans, while allowing them to explore new ideas and new world. On December the 1st, PSB unveiled their 2017 lineup for the winter and spring season. The network has brought British television to Americans for the last many years and they’ll continue to do so in the year to come. It will all start on January the 15th, with the premiere of the British drama Victoria. The series stars Dr. Who actress Jenna Coleman as the historical figure Queen Victoria. The Man in the High Castle’s Rufus Sewell and The Game’s Tom Hughes also appear in the series. 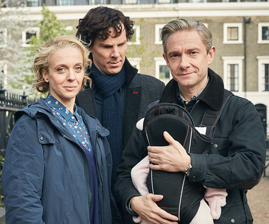 On New Year’s Day, Benedict Cumberbatch will return as Sherlock Holmes. The series has become very popular in the United Kingdom and the United States, with around 10-11 and 4-6 million average viewers per season respectively. The network’s original drama series, Mercy Street, will debut its second season on January the 22nd. The series received moderately positive reviews last season. The show covers the tumultuous American Civil War. PBS will also continue providing Americans with live musical performances from some of the top musicians in the world.

In January, PBS will air live performances from Alicia Keys and Brad Paisley. In February, fans will be invited to watch the network’s new Nature series, Spy In The Wild. PBS’s American Experience will also return next year. The Great War will begin airing on April the 10th, while Oklahoma City and Ruby Ridge will air in February. Throughout early 2017, the network will bring several other British shows to American audiences. The 6th season of Call The Midwife will begin on April the 2nd. It will be followed by the final season of Home Fires. For additional information, be sure to visit the following link.