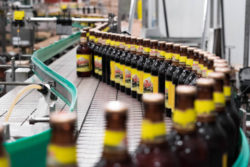 Beers lovers in the Northwest region of America will rejoice this week, as Rainier Brewing Company launches their brand new beer. This isn’t the only milestone the company will set. The Rainier Pale Mountain Ale is set to be brewed in Woodinville, WA. This makes the first time the company has setup operations in Washington state in 13 years. The company’s Seattle field representative, Kurt Stream, admits the company’s goal for the new brew is to “honor and build on that”, referring to the company’s rich heritage within the area. The company is stepping back into the past and even using their pale ales from the 1930s as inspiration for the new packaging design.

The new beer is manufactured utilizing 2-two barley and Yakima Valley hopes. The combination delivers an authentic malt taste with a citrus finish. The beer will be sold in 16-ounce bottles within retail establishments and will also be sold in pubs, taverns and restaurants. Rainier has been in the business since 1878 and was once recognized for running the biggest brewery west of the Mississippi. The new beer is scheduled to hit the market this week. A six-pack of Rainier Pale Mountain Ale is set to retail at $11.99. Pale Mountain Ale will contain an alcohol content of 5.3% and a total of 134 calories. Additional information regarding the new beer can be found by checking out the company’s press release.