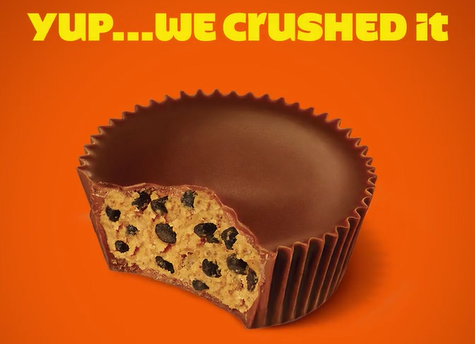 Reese’s has firmly established itself as a staple of American society with their delicious chocolate and peanut butter cups. Many consumers will agree that it is nearly impossible to beat that aged old combination of chocolatey goodness. After several weeks of hyping up the unveiling via social media, Reese’s is finally ready to introduce their new scrumptious creation to the public. The company, which is owned by The Hershey Company, put an end to the mystery on Thursday by unveiling their new Crunchy Cookie Cup.

While the change is very minor, the end result is drastically different from the original peanut butter cup. The only difference is the fact that the new Crunchy Cookie Cup adds crispy bits of chocolate to the cup’s peanut butter filling. Unfortunately, consumers will not be able to get their hands on these delicious goodies just yet. The company expects to launch the new candy nationwide in May of this year. There is some good news though. The candy will be available in the standard size, as well as the much bigger jumbo Big Cup Size.

Hershey will hope to regain their footing in the United States market, while facing turmoil in China. The Chinese government has recently decided to penalize Hershey by shutting down one of the company’s factories, after they were caught up in the United States missile defense system squabble. While Chinese authorities have already taken action against South Korea’s Lotte Group, American companies have remained unscathed until now. Of course, it should be noted that Chinese authorities remain adamant that a political motive is not involved in the factory’s closure.

Instead, the Chinese government suggests production was halted due to potential safety violations. The plant is actually cooperatively run as a joint venture between Hershey and the Lotte Group. According to an official with Hershey, closing the factory for a month could cost the joint venture as much as 3.5 million dollars. To date, Hershey has continued to struggle to gain a footing abroad. To remain in the green, the company will need to focus on keeping their Western customers satisfied. With a little luck, the new Crispy Cookie Cup may prove to be a step in the right direction.