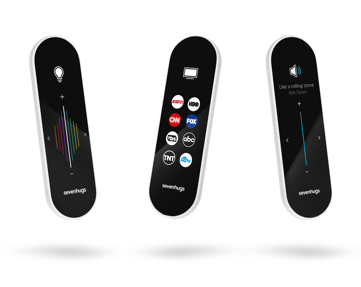 Over the past few years, the simple television remote has been renovated, upgraded and revolutionized. Standing in front of your television punching in pre-configured codes to program your remote is no longer required. While the television remote control has undeniably come a long way, Sevenhugs believes the technology can go even further. Today, the company launched their Smart Remote on the Kickstarter platform. The company insists their smart remote will give consumers the ability to control any device simply by pointing the remote in its direction.

The patent-pending point and control technology has been designed to give the Smart Remote’s screen the ability to seamlessly switch from one device to another. When pointed at an eligible device, the Smart Remote’s screen will display custom options for said device. The remote will be compatible with more than twenty-five thousand devices ranging from smart thermostats to smart lightbulbs and even smart televisions. Truly, the possibilities are nearly endless. Some of the remote’s most notable featured will be explored below.

The Smart Remote from Sevenhugs is currently on Kickstarter. To date, it has received over $190,000 from more than 1,400 backers. The projects has already greatly surpassed its initial goal of just $50,000. Consumers can now preorder the remote control through Kickstarter at the early-bird discount price of $99. The company expects to ship the first batch beginning in June of 2017. The remote will be available from select retailers at the price of $299 beginning in Fall of 2017. Additional information can be found by visiting remote.sevenhugs.com.