Sling TV has been around for several years now. The service has undeniably grown significantly since its inception. yet it is still in its infancy. Since the beginning, Sling TV has never streamed a live pay-per-view event. That will change this Saturday, July the 29th. On that date, Sling TV will provide customers with access to the Ultimate Fighting Championship’s UFC 214. The event is headlined by a world light heavyweight title fight and rematch featuring Daniel Cormier and Jon Jones. The card features not one, not two, but three title fights. 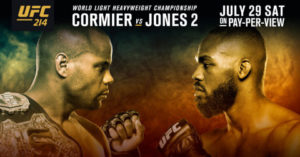 In the co-main event, current welterweight champion, Tyron Woodley, will put his title on the line against jiu-jitsu ace and former middleweight contender, Damian Mia. The third title fight is a female featherweight battle. Cristiane “Cyborg” Justino will face off against former Invicta champion Tonya Evinger. The winner will be crowned as the UFC’s female featherweight champion.

CEO of Sling TV, Roger Lynch, believes the partnership helps to make Sling TV a true replacement for cable television. UFC 214 is considered to be one of the company’s most anticipated cards of the year. As of today, current and new Sling TV subscribers can purchase the UFC 214 event. Just head over to Sling TV’s official website and login to your account. Then, click on the UFC 214 fight banner.

The new channel will appear in the guide. Content will be made available as soon as the event is live. For additional information, be sure to check out Sling TV’s official press release here.