Sparx Hockey, which is based out of Massachusetts, has gained popularity for their Sparx Sharpener. The Sparx Sharpener system is affordable and completely automates the sharpening process. In fact, the company insists it is so easy to use that anyone can use the system to achieve pro-level accuracy. The product is currently utilized by 2,500 customers throughout the United States and Canada. Customers range from singles to families and even rink operators. And of course, the company has encouraged more than a dozen AHL and NHL franchises to add the Sharpener to their arsenals.

The company also plans on expanding outside of North America and insists there is already high demand in the Asian and European markets. On December the 29th, Sparx Hockey announced a new partnership, which will help them gain even more recognition. The company entered a new partnership with the National Women’s Hockey League, NWHL. They have also gained financial backing from current NHL star Thomas Vanek. As the Official Skate Sharpening Partner of the NWHL, the Sparx Sharpener will be utilized by the majority of hopefuls for the United States Olympic Women’s Hockey team. 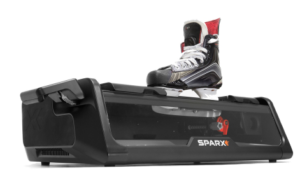 The Sparx Skate Sharpener made its debut on Kickstarter back in March of 2015. That came after many years of research, planning, and development. Thanks to the excitement from the Kickstarter community, the campaign was fully funded in less than 5 days. The company began shipping the product to buyers a year later. Since the company has started fulfilling orders, they have already shipped more than 2,500 sharpeners, with customers originating from 49 of the 50 states in America. And, other customers are found in all, but two, of Canada’s provinces and territories.

The privately held corporation is based out of Acton, Massachusetts. Amateur, professional, and hobbyists throughout the world rely on the company’s products each and every day. To learn more about Sparx Hockey and their products, be sure to visit their official website at http://sparxhockey.com.