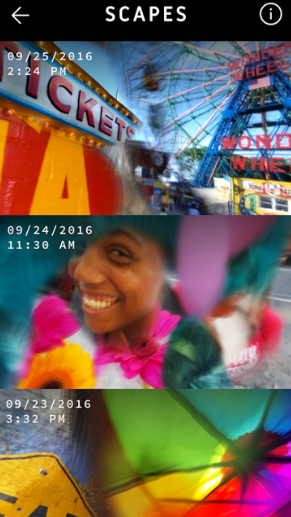 On October the 12th, Google Creative Lab launched their brand new VR-inspired camera app called Sprayscape. The app, which is currently available through Google’s App store, makes it possible for all Android phone users to create their own 3D pictures. Sprayscape puts VR in the hands of all Android users and gives them the ability to create bizarre VR environments. The app isn’t designed to become a direct competitor of Instagram, but is intended to give users their first experience with Virtual Reality.

Google’s Sprayscape is substantially different from similar apps, such as Cardboard Camera and Photosynth. While the aforementioned apps attempt to deliver a comprehensible image, Sprayscape does not. Nothing is pieced together and the end result isn’t meant to be perfect. Instead, Sprayscape allows users to create their own warped realities. The end outcome, which is generated by the user, could easily be classified as a messy. Yet, it is a beautiful and somewhat artsy mess, which can be viewed through any Android phone or the Google Cardboard headset.

The app may or may not be groundbreaking. It is simply too early to tell at this point. Nonetheless, it does provide a first step or an introduction to a groundbreaking technology. Users can share their creations with others through social media and text messages. Ready to experiment with Sprayscape? The app can be downloaded from Google’s Play store here.