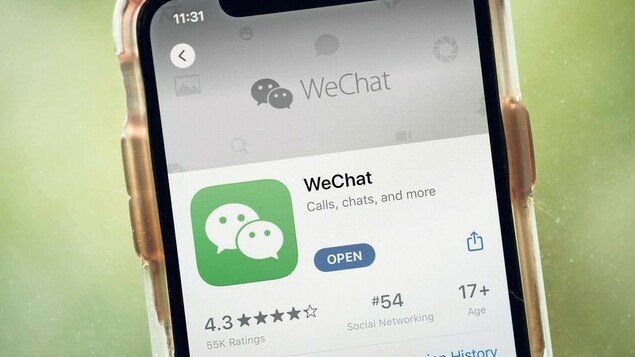 The breathtaking rise of WeChat will have displeased US President Donald Trump. Officially his reasoning was: “Like Tiktok, WeChat automatically collects huge amounts of information from its users. This data collection threatens to give the Chinese Communist Party access to personal and proprietary information of Americans.” The decree issued by Trump goes on to say: “The United States must take aggressive measures against the owner of WeChat to protect our national security.”

In China, at any rate. WeChat, or Weixin As the app is called in China, “too big to fail” is the well-known saying since the global financial crisis. This is probably another reason why Trump is planning to ban the app in the USA in the current competition for technological leadership with China: It’s too powerful. Because Tencent, the company behind WeChat, is one of the ten most valuable companies in the world. With WeChat, it combines various functions of the companies of the US Internet economy in one app.

WeChat is the app for everything in China

With WeChat, you can pay in the supermarket or restaurant, make appointments with the doctor, shop online, book taxis. One can order cinema tickets or, since recently, also use the Corona Health App, which is supposed to prove that one is healthy in order to be allowed to take the bus or the subway.

China’s software specialist Tencent launched WeChat 2011 and has since evolved from a messenger service to an all-rounder. WeChat works like Amazon, Whatsapp, Facebook, LinkedIn, Uber, Instagram, Skype, Twitter, and several other apps in one. For many Chinese, WeChat is an indispensable app for communicating in everyday life, both privately and professionally.

“Everyone in China uses WeChat. It’s hard to understand how important the app is to reach people in China,” Willy Shih, professor at Harvard Business School with a focus on technology and management, told CNN, the US television station. “It seems like we’re trying to create an iron curtain between countries so people can’t communicate with each other.”

WeChat is used by one billion people and is the universal tool among smartphone programs. In the USA alone, according to the “Financial Times“, about three million overseas Chinese and students from China are expected to use WeChat every month to talk to their families in China.

The money came initially from the USA

In 1998 Ma Huateng founded Tencent and became successful with its predecessor, an instant messenger called OICQ – Open ICQ. After a name dispute with AOL from the USA, Ma changed the name to QQ, and millions of Chinese people use the service also because of the free sending of files.

Initially, the initial financial support for Ma came from US venture capitalists. Naspers, too, is a shareholder with a one-third stake in Tencent, which is considered one of the best stock market transactions of recent years for the South African media group.

The lives of many Chinese people are now reflected in WeChat. This is extremely useful for the Communist Party, because it has its citizens under control, censored and monitored. Thus, the Communist Party has access to government critical statements, data, and photos from all WeChat accounts. For two years, these have been stored with the users’ identity card data. The state can, therefore, take full action.

This omnipotence in an app pays off on the stock market. Tencent’s share price rose by over 50 percent last year. But the threats of the US president are also having an effect here. After Trump’s decree, Tencent’s shares on the Hong Kong stock exchange plummeted by over ten percent.

Within two days, the technology company from Shenzhen lost 66 billion dollars in market value as a result. What at first glance looks like a threat to one of Tencent’s most important business models could also have a devastating effect on some US companies.

Impact on the USA

In the USA, Tencent is a major shareholder in the electric car manufacturer Tesla and Snap, the manufacturer of instant messaging service Snapchat. Tencent bought five percent of the electric vehicle manufacturer for 1.78 billion US dollars in 2017. Tesla boss Elon Musk has described Tencent as “investor and advisor to Tesla”.

Tencent has signed streaming contracts worth hundreds of millions of dollars with the professional basketball league NBA, the American Football League NFL, and the Baseball League. Apple or Google’s app stores could also be banned, as both contain numerous apps from Tencent, which are now would have to be removed from the app stores by September 20 at the latest.

For Apple, the most important Asian market for its iPhones to date would then be threatened. “Since WeChat is very important to Chinese users, integrating communication, payment, e-commerce, social software, news reading, and productivity features, we believe that the move will affect iPhone deliveries in the Chinese market,” wrote TF International equity analyst Ming-Chi Kuo in a research report to investors. “We estimate that global iPhone shipments will decline by 25-30 percent.”

But it’s not just Silicon Valley that is affected by Trump’s plans. Especially the computer games industry, once Tencent’s second mainstay besides WeChat, fears for its future. In the past few years, Tencent had purchased Riot Games from leading US game providers such as Epic Games, Blizzard, and “League of Legends” developers. In the meantime, the US government is said to have already backed off and announced that the video games industry is not affected by Trump’s decree. This is reported by Bloomberg and the “LA Times”.

Tencent already has holdings in Germany, for example in the online bank N26. The Chinese are sought-after partners for start-ups that need large sums of equity capital, which they cannot find in Europe. When the electric aircraft manufacturer Lilium closed a financing round of 240 million dollars at the end of March, the largest share was given by Tencent.