This week, Ubiquiti Networks (NASDAQ: UBNT) announced that its consumer technology arm Ubiquiti Labs would be launching its AmpliFi HD Mesh Wi-Fi products in the United Kingdom. The AmpliFi HD is designed to help consumers solve the most common problems associated with home Wi-Fi networks. This mainly includes dead zones and slow connections. The AmpliFi devices have been designed from the inside out. The company believes the AmpliFi should be a showcase piece for the modern home.

The router can be connected to adjustable MeshPoints, which will distribute the Wi-Fi signal throughout the home. The MeshPoint can be plugged into any open electrical socket to help eliminate cables and clutter. The plug-and-play setup is guided by a mobile app, allowing the AmpliFi device to connect directly to a smartphone with Bluetooth technology.

The user friendly interface allows user to monitor their Internet speeds, network and perform a whole host of other actions. Simultaneously, the app allows the user to access in-app support 24/7. The system relies on 802.11AC Wi-Fi technology capable of powering a maximum of 5.45 Gbps of aggregate wireless throughput. Vice President of Business Development at Ubiquiti Networks, Ben Moore, made a statement about the launch in the United Kingdom. 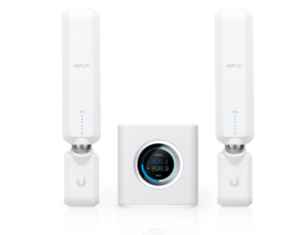 “AmpliFi HD Mesh Wi-Fi solutions quickly gained popularity in the United States due to their sleek industrial design, plug-and-play installation, and superior performance. We are excited to now make them available to customers in the United Kingdom.”

The AmpliFi HD Mesh Wi-Fi System, Mesh Router, and Mesh Point are all now available in the United Kingdom. These products can be purchased from Scan Computers as well as Amazon.co.uk. Ubiquiti Labs expects the products to be made available to additional retailers in the coming months.