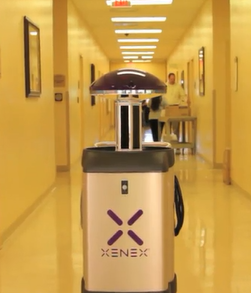 Today, Trinity Health has announced the expansion of their germ-fighting robotic army. Just last spring, Trinity Health decided to adopt the innovative pulsed xenon UV disinfection technology within their accurate care hospital. They did so with the deployment of two sanitizing systems. Now, they will enhance their fleet with the addition of pulsed xenon UV disinfection devices. The company has decided to add germ-killing robots to two of their hospitals and made the purchase with funds provided by Trinity Health Foundation Board.

The company’s directory of Infection Control, Brenda Lokken, admits the robots will provide an additional layer of protection for all residents of the nursing home facility. Xenex Robots have been credited with decreasing the rates of MRSA, clostridium difficile, and surgical site infection. During the last week, housekeeping staff members at the nursing home have undergone training to learn how to operate the new robots.

Once the traditional cleaning procedure has been carried out, a staff member will wheel the robot into the target room and the automated sequence will begin. The staff member will exit the room, while the robot utilizes a lethal dose of UV light to target and destroy all fungus, spores, and bacteria within a matter of minutes. Over the coming months, Housekeeping staff members and representatives from Infection Control will work alongside Xenex representatives to ensure the robots are utilized correctly, safely, and efficiently. The two will also work together to craft and implement a standard operating procedure, which will help to reduce healthcare associated infections.

According to Xenex’s official website, the company’s Germ-Zapping Robots are utilized by more hospitals than any other device for no-touch room infecting purposes. The company’s goal is to save lives, while preventing fruther suffering, by eliminating microorganisms, which lead directly to hospital acquired infections, HAIs. According to research, the company’s innovative robot is capable reducing infection rates by as much as 50% for MRSA, 70% for C.diff, and 100% for surgical site infection.

The collaboration between Trinity Homes and Xenex could very well revolutionize the modern hospital, while providing betterment to millions of patients throughout the world.